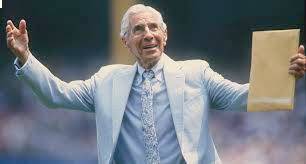 HILLSIDE, NJ – Anyway, somewhere in the speech (Rizzuto) told about leaving home in Brooklyn for the first time when he was 19 years old and going to play shortstop in the minor league town of Bassett, Virginia, and was on a train with no sleeper and when he got to its first taste of Southern fried chicken and it was great and was also the first time he ever ate – Hey, White, what’s that stuff that looks like oatmeal? – and Bill White, his onetime announcing partner on the Yankee broadcasts and, but like all his partners, never seem to learn their first names, though he knew the first and last names of a lot of birthdays he forever is announcing and the owners of his favorite restaurants even though as he admits he often talks about the score or the game, but after 38 years of announcing games and after a 13 year playing career with championship Yankee teams few seem to care about this either, well White was in the audience and stood up and said, “Grits”. ~ New York Times columnist Ira Berkow, describing (and emulating) The Scooter

How The Cast Iron Stove Almost Destroyed America – But Didn’t!