Bernie!, Bernie!, What Have You Done? 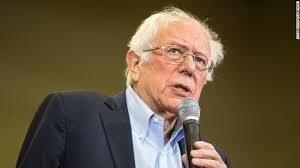 Bernie’s song is the loudest in the assemblage. It says many things: Bernie is a socialist, a Jew, an atheist, a senator from Vermont, wants open borders, and wants free healthcare to all (erroneously called Medicare for all – not true. Real Medicare requires 45 years of premium payments before any benefits are received, Bernie’s plan is a freebie[1]). It also says that Bernie has been a public official for 37 years.

One thing it doesn’t say: What The Hell Has Bernie Ever Done???

(Where the hell is Gus Hall when you need him?)

[1] Free to the beneficiaries, that is.  Someone (Not yet clear who) is going to have to pay for it, eventually!