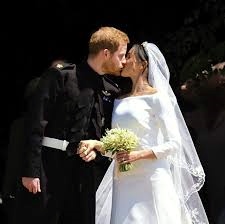 British Prince Harry Windsor and American Princess Megan Markle (a/k/a The Duke and Duchess of Sussex) have delivered a “personal”[1] message that they will “step back as ‘senior’ members[2] of the royal family and work to become financially independent”.

NBT (No Bulls**t Translation): We want the glory, power and honor of being royals, but we don’t want to do any of the work.  We’d rather just use our royal status to make even more[3] money[4].

Interestingly, the Markle/Windsors have already “stepped back” from (i.e. abandon) the Markle family (except for Ms. Markle, Sr.) and now they will be stepping back from the Windsor family.

I wish them luck and expect that we will soon be seeing Harry’s face on Wheaties boxes and whiskey bottles and Megan’s nude photos in ads for breast enhancement.

When the Queen was blindsided by the statement, she issued the following statement, “. . . these are complicated issues that will take time to work through”.

NBT: We (The Royal We, of course) are pissed!

(Author’s Note to Markle/Windsor family: There’s more to life than a little money, ya know.[5])

Let’s all hope that Prince William and his heirs stay safe!

[1] Personal, how cutsie. This is probably the first “personal” message delivered worldwide on every media.
[2] The most junior senior members I ever saw.
[3] The Markle/Windsors already cost British taxpayers six and a half million dollars every year.  Apparently, that is not enough!
[4] As evidence, they just Trademarked the product name “Sussex Royal”.
[5] Marge Gunderson, Fargo