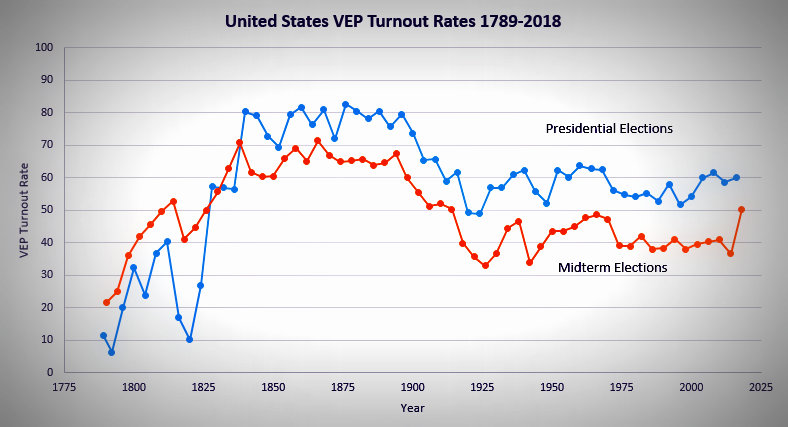 LOTSEE, OK – A lot of people, especially those who deign to know everything about the body politic feel (and constantly say) that the strength and success of a democracy is revealed by how many of its citizens vote.

I don’t think so! In my humble opinion, a democracy’s strength and success can be shown not by how many vote, but by how few vote. A low voter turnout is what really reveals a strong and successful democracy (and, by definition, country).  Here’s why.

Let’s be frank; there have been only two kinds of elections that produce very high voter turnout. The first example of a “very high voter turnout” election are the “elections” that were held in the old Soviet Union (and most other communist countries). Voter turnout was high (even though the ballot contained the name of only one “approved” candidate) because anyone who failed to vote put their lives, careers, property, and family at risk[1]. Communist countries had secret police to protect the citizens from not voting. These elections were not free and not fair. Let’s hope that we never have to face this kind of election in our country.

The second example of a “very high voter turnout” election was the 1990 election in Nicaragua, where communist President Daniel Ortega ran against pluralistic democrat (sort of), non-communist Violeta Chamorro. Even though Nicaragua was a communist country (sort of) at the time, this election was relatively free and relatively fair.

The people of Nicaragua, who are far smarter than they get credit for, understood their situation and decided to do something about it. They decided to vote, even though they had to wait in long lines, for hours on end, in the hot sun and in the pouring rain to cast their vote, but cast it they did. 89% of Nicaraguans eligible to vote registered to do so and 86% of those who registered actually voted[4]. Their efforts were worth it. Mrs. Chamorro won with 53.9% of the vote.[5]

The voter turnout in this election was high because the electorate knew their country was going to hell in a handbasket and recognized that voting the rascals out was the only way to save the country and themselves.[6] The citizens of Nicaragua instinctively knew that if they didn’t vote, they would face a fate as bad as Soviet citizens who didn’t vote. Let’s hope that we never have to face an election like this in the U.S. either.

As long as the electorate is free to vote, without coercion, low voter turnout signifies two interesting things about the electorate. One, they don’t really care who is elected. Contrary to how this sounds, it doesn’t mean the voters are apathetic. In a free an open democracy, it means they might feel: either party will do an acceptable job; the difference between the parties is not enough to worry (or vote) about; the job performance of either candidate would be acceptable; and/or the country will head in the right direction whatever the election results.

Low voter turnout also means that, rather than vote, the electorate would rather play with the children; enjoy the day off; earn some overtime so the family can splurge on next summer’s vacation; or play some pool at Kelly’s Bar. Now this is the sign of a strong and successful country and a satisfied and happy voter; isn’t that really the main purpose of a government?

That’s about it, except for one more thing. While I am suggesting that a low voter turnout is a sign of a successful and strong democracy and also the sign of a contented voter, I don’t mean to say that the electorate should keep their heads in the sand. Voters in a democracy should stay informed and if their elected leaders ever begin to coerce them like the Soviets did their voters, or if the country ever approaches the conditions in Nicaragua in 1990, 100% of the country’s electorate should “pull a Chamorro” and vote every elected official out!

To assure that elected officials understand the voters’ feelings, everyone should, from time to time, send their Representative, Senator and President a little note saying, “We’re still watching you!” Every elected official should always be made to look over his/her shoulder to make sure the voters behind him/her are carrying iPhones, not pitchforks.

[2] The press coverage of civil wars in Central America always made me laugh. The communists were always dubbed “Left Wing Freedom Fighters”, while the democrats were always called “Right Wing Death Squads”. I wonder which side the press was pulling for?

[5] The Nicaraguan electorate was correct. Mrs. Chamorro ended the civil war, brought peace to the country, ended hyperinflation, instituted social programs, and convinced the U.S. to pay off all of Nicaragua’s debts and provide Nicaragua with 300 million on foreign aid.

[6] Interestingly, Daniel Ortega was again elected President in 2006 (with only 38% of the vote). Fortunately, by then he had lightened up. He abandoned his revolutionary tone of the past, infused his campaign with religious imagery, gave thanks to “God and the Revolution” for the post-1990 democracy, and claimed a Sandinista victory would enable the Nicaraguan people to “pass through the sea and reach the Promised Land”.